During the ice age which occurred many million years ago, ice and glaciers were widely spread from the north and south poles. when a glacier moves past a smooth rock, it leaves behind deep scratches and deposits sediments that it has collected which can be identified, dated and traced to its original place.
300 million years ago, the Palaeozoic glaciation took place. The glaciers left scratches on rocks, which today are several continents and far away from eachother, the poles and are now positioned on the equator.
with the continents such great distances apart, it would have been impossible for this to happen unless they are all  realigned and moved towards the south pole. with this done, the glacial positions would be more reasonable. 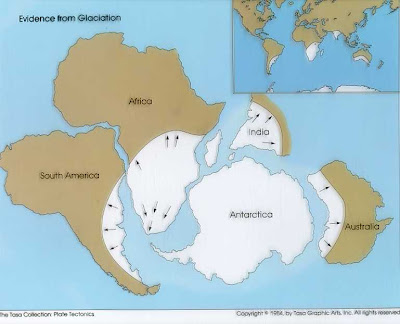 Posted by carlamercedes at 3:06 AM No comments:

Some rocks and minerals can only be created under certain conditions. An example of this is the coal deposits found in Antarctica. for the production of coal to occur, an environment with organic material and warm swampy areas is needed. The discovery of the coal deposits in such a cold place suggests that Antarctica must have had a much warmer climate. This may have been possible if it was once located in a warmer latitude and drifted to its current position. 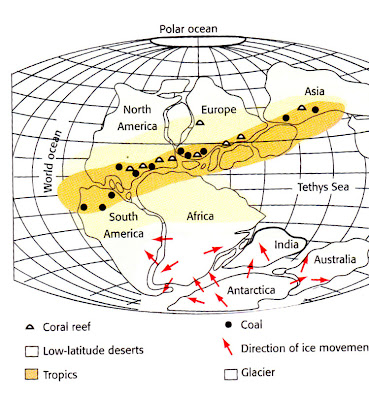 Posted by carlamercedes at 2:49 AM No comments:

If the continents were realigned, some of the geological formations on them would line up perfectly when they are placed together. These formations such as the Appalachian mountain range in the eastern part of the United states matches in age of those found in Scotland, and Scandinavia provides evidence in support that the continents have drifted apart over millions of years. 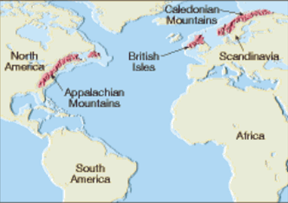 Posted by carlamercedes at 2:19 AM No comments:

During the time that the supercontinent Pangea existed, the same type of plants and animals would have been distributed throughout the landmass. Today, these plants and animals have been extinct, leaving behind their fossils and some evolved species. These fossils records show how they were distibuted.

An example to support the theory of continental drift are the fossils of Lystrosaurus. This sheep-sized reptile existed 200 mya and its fossils are found on the continents of South Africa, India and Antarctica. These creatures couldn't have evolved on these continents alone nor could they have crossed the oceans, meaning that the continents whould of had to be joined in the past. 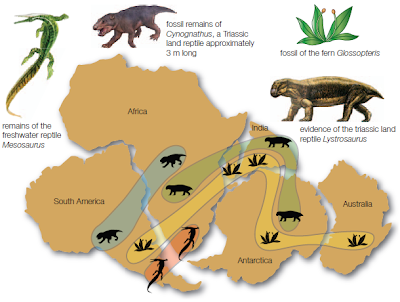 Posted by carlamercedes at 1:43 AM No comments:

Age of Ocean Rocks And Sediment

In the 1960’s Harry Hess proposed the theory of sea floor spreading. He described this movement as a conveyor belt motion. This explained why the youngest rock were only found in the mid-ocean ridge and the they got older as they moved away from the ridge. He stated that if the sea floor was spreading, the continents would be able to move away from one another.
Hess explains that the sea floor spreading was due to the mantle convection. The hot magma rises at the ridge as it is less dense. When it reaches the surface it cools down and becomes the sea floor, and as more magma rises, the ocean floor is pushed further apart.

Posted by carlamercedes at 4:15 PM No comments: